State of the Art Technology

A new technology of cybernetics and German precision engineering enables KEMroll to create a completely new winding quality. Here are some of it’s technical secrets:

Film will become the Treasures of the Future

In these times of digital cinema the value of your analog film assets will undoubtedly increase within the next decades. Simultaneously there are new incredible capabilities  arising in digitalization and globalization – if the film stock is well evaluated and treated with care in our archives.  Film is a treasure – we need to care for it 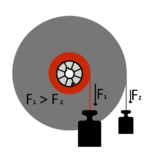 In friction systems like conventional rewind tables there is the physical rule of  torsional moment: The closer you come to the core while winding, the greater the impact on the film will be created by the force of film tension

KEMroll determines for a consistent wind with the same winding tension over the entire reel. This is realized by a cybernetic dual microprocessor controlled motors in real time

KEMroll winds any stock or magnetic film – no matter how difficult

The KEMknob-axis can be adapted to almost every rolls, bobbins or spools. Currently KEMroll is available for 8 mm, 16 mm, 17.5 mm and 35 mm material – other formats available upon request

Another special thing about KEMroll is its make-up mode:
For loose reels, very difficult material or stock without a core there is a common and useful method of winding: to pull the film from one single driven plate using manual friction to determine the quality of the first winding.  It’s always possible to grab or touch, or even edit your film during winding

There are various safety devices like an automatic slow down or stop function at the end of the reel or a film tear, or sticky film sensor.

It is a very simple operation. You may synchronize the stroboscope working backlight with the film speed and use as a backlight to recognize the film content while winding.

KEMroll has a modern design, is lightweight and is incredibly stable. The height of the table surface may be determined by the customer as an option.